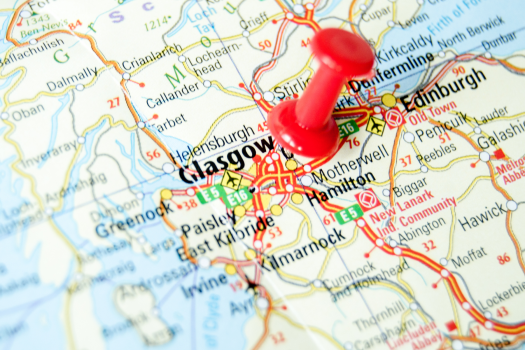 This summer, we have been working with North Face to help provide women guides for some of their city walks, testing out a new hiking shoe for women. Those women who wanted to could try out the new footwear as they paced around the city streets.

One of our guides, Nadine, led walks in and around Glasgow and Edinburgh and shared how it was… She will be leading an Edinburgh walk for us in September.

Maybe Glasgow next! Thank you to Nadine for jumping in to help out … 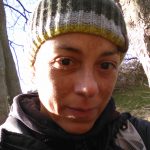 At the end of June, I led a couple of walks for The North Face team.

For the Glasgow walk, I picked Castle Semple County Park, which is only a short drive from the city centre and has a fascinating history with a grotto, ice houses, cascades and a maze. I was a bit alarmed when I arrived and saw several coaches parked up. I thought I would have huge numbers of people walking about, but it turned out these were sea cadets doing competitions on the loch! We followed the hill and woodland trails, exploring the various features along the way except for the maze, which was so overgrown we thought we might never find our way out if we went in! The North Face participants tested the shoes on the hill trails and enjoyed the views over the loch to the surrounding countryside. 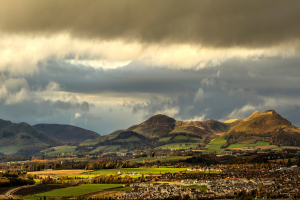 The following day was the Edinburgh walk in the Pentland hills just to the south of the city, which has a range stretching to 20 miles in length. We hiked around Bonaly Country Park at the north end, through woodland up Capelaw hill, down to Bonaly reservoir, along a valley path to Clubbiedean reservoir and the Coffee Stop for refreshments. We returned past the waterfall between Clubbiedean and Torduff reservoirs. This was a more physically challenging route than the previous day, but as always, we went at the pace of the slowest participant, which allowed us all to enjoy the great views over Edinburgh and across the Firth of Forth to Fife.

Trying out the new footwear

I actually never got to test the VECTIV Hike footwear on either of the days because there were none left in my size – the participants had first dibs! I did get a couple of water bottles (can never have enough of those), so I didn’t totally lose out.

I liked the challenge of not knowing who would turn up on the day or how many and having to alter the route as we went to fit the participants’ needs and circumstances, and I was really chuffed that I managed to get everyone back to the meet point exactly on time both days. Important for me because the Saturday was Edinburgh Pride, and though I missed the march, I wanted to meet up with my pals after – no way was I missing out on that!